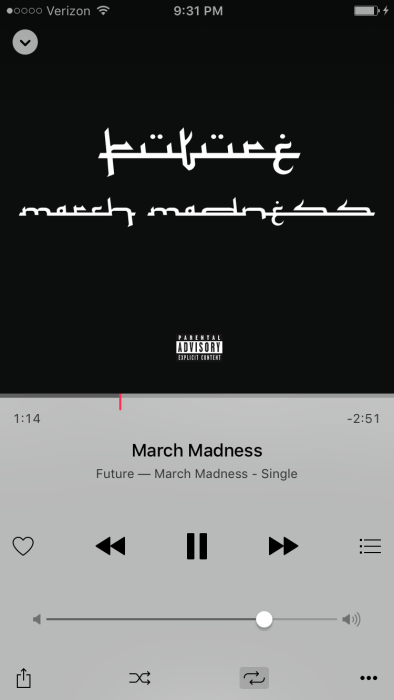 Future’s current run since the release of Monster in October of 2014 has been quite the marathon to behold. Following the success of Monster, his ensuing releases Beast Mode and 56 Nights –  mixtapes with almost zero features that were more complete and engrossing than most albums released in that time frame – served as landmarks that the rest of the rap world could use on their trail of catching the fuck up to Hendrix. Those three mixtapes alone, before the massive releases of DS2 and What a Time to Be Alive – an album that Future occasionally let Drake rap on – represent three acts of a largely one-man show telegraphing Future’s eventual position as the biggest rapper on earth.

While each of Future’s mixtapes in that era truly had gems, it was “March Madness” off of 56 Nights that became one of the paramount tracks in Future’s catalog, as well one of of the biggest singles of the year. The Tarantino-produced track is a lumbering force: a jarring baseline listing back-and-forth under what sounds like a codeine-soaked R2D2 – it’s a fitting bed for Future’s marching, savage warble.

Future’s writing on “March Madness” has an assured, authoritative voice. It’s clear he knows the direction he needs to go after some questionable past career movies and right off the jump, this is not Pop Star Future: “Dress it up and make it real for me / Whatever the fuck that means.” Over the course of the track, Future offers layered proclamations that while boastful, do convey an underlying recognition of a shitty reality: “I’m the one that’s living lavish / Like I’m playing for the Mavericks / I didn’t want to fuck the bitch / The molly made me fuck her even though she average.”

It’s that type of conflict and complexity that has made Future such an enigmatic star – there is a very real, relatable sadness to his music even though he can seem so, at times, (worth mentioning: self-described) alien. Future channeling that humanity also makes “March Madness” a richly layered, dope fucking song – he succinctly summarizes America in 2015: “We ballin’ like the March Madness / Cops shootin’ niggas, tragic” and succinctly summarizes Future in 2015 and beyond: “Fuck a cougar like she Halle Berry / Future Hendrix, dirty Sprite, legendary.”

“March Madness” – and Future’s current run in general – reminds me of an early, made-for-TV Spielberg film called DUEL (1971). It’s the story of a traveling salesman driving on a lonely patch of interstate who is stalked by a hulking 18-wheeler operated by some unseen, malevolent force. Try as the salesman may, he cannot shake the semi truck and it continues to overtake him and generally make his life an anxious hell. Well, to make a convoluted (and pretty contrived) comparison: Future is that truck and the travelling salesman is the endless stream of fuckshit coming out in an increasingly disposable era of music. Let’s pray he never (spoiler alert) goes off a cliff.